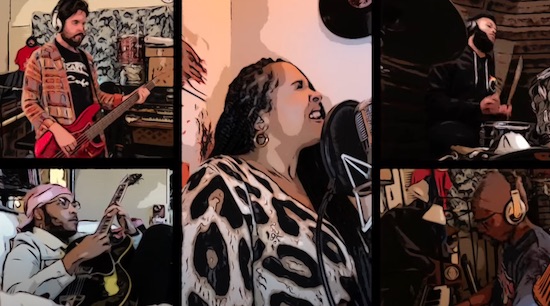 Virginia’s Butcher Brown has done an exemplary job of keeping their creativity flowing in the midst of the pandemic's uncertainty. Their “Mothership Mondays” series, which kicked off in April 2021, has quickly become a standing appointment for music lovers, artists and anyone seeking a bit of inspiration. What began as solo sessions intended to “sharpen skills and keep tracks tight,” as well as a means to “shift the whole weight of the business to something else,” has blossomed into virtual masterclasses chock full of creativity and surprise collaborations.

For their most recent installment, the fellas once again tapped Los Angeles songbird Alex Isley to bless their rendition of another classic. While their take on Patrice Rushen’s “Remind Me” raised the bar, this time they chose to tackle Brandy’s hit “Best Friend,” from her 1994 self-titled debut album. Though the track is kept largely similar to the original, the jazz fusion quintet adds their soothing signature with punctuated saxophone riffs and guitar licks, courtesy of Marcus “Tennishu” Tenny and Morgan Burrs, respectively. Ms. Isley’s tranquil vocals are the perfect complement to this tribute, paying homage to a legend while staying true to her trademark celestial tone.

Acquaint yourself with Butcher Brown and Alex Isley’s “Best Friend” cover below. Though the persistence of the pandemic has kept touring schedules somewhat up in the air, SoulBouncers in the Tri-State Area can plan to catch the band live at the Blue Note in New York City next month.